It is with sadness that we share the news of the death of Jim Radford who died in Lewisham Hospital early this morning after several weeks in intensive care being treated for Covid-19.

Jim leaves behind his family and a huge number of friends, comrades and musicians, all of whom could recall a Jim Radford story. In this brief article I will focus on Jim’s time with Veterans For Peace and leave the other aspects of his life to those who knew him best in those realms.

Jim was born in Hull and recounted to me his experiences of the bombing of that maritime city and his youthful desire to join the fight against Nazi Germany. At the age of 15 he joined the Merchant Navy and sailed to Normandy on the rescue tugboat Empire Larch in direct support of the D-Day landings. After the war Jim went on to serve in the Royal Navy and it was during or shortly after that service that he developed an opposition to nuclear weapons.

I first met Jim in 2011 at an anti-war event hosted by the London Catholic Worker in an old church in Haringey. Later that year I got in touch with him to ask if he would join a new organisation; Veterans For Peace UK. He joined without hesitation and was steadfast from that day onwards.

At our first Remembrance Ceremony outside the Bank of England in November 2011, Jim was one of only three VFP members present. He brought along an old Ex-Services CND banner and not having a VFP banner at the time we marched under that. Jim brought a wealth of experience to our fledgling organisation, offering sound advice based on years of participation within anti-nuclear and peace organistaions.

When the time came in 2014 to form a Steering Group to coordinate the rapidly expanding organisation Jim stepped forward and filled a position for the next two years. Jim was forceful in arguing that we should remain a voluntary organisation with no paid workers. This position became and remains a key characteristic of our organisation.

Jim brought a depth of experience, know-how and common sense to our monthly meetings. He was involved in the planning of our first Remembrance Ceremony at the Cenotaph in 2013 and was one of only a dozen VFP who attended. We marched to The Cenotaph on that Remembrance Sunday without invitation or permission and Jim sang “1916” as crowds of people stood and watched in silence. Jim sang at The Cenotaph every year after that and our numbers grew.

Jim was well known for his singing and regularly contributed with anti-war songs at our actions and meetings. It was as a speaker that Jim impressed me most. His life experience and pragmatic anti-war position was free of complicated narratives or ideological rhetoric. Once in Los Angeles when questioned why he campaigned for peace for so many years without tangible results he replied simply that “it was the right thing to do”.

Outside of the meetings, actions and speeches Jim took part heartily at our social gatherings. Always a cheerful, generous and welcoming presence, His capacity for socialising was almost superhuman, able to keep up with members 1/3 his age and still get up early to complete his morning exercises.

It is safe to say that Jim will be missed by members of Veterans For Peace all over the world.

I for one will miss his friendship, his guidance and his comradeship.

Jim singing his chart topping single The Shores of Normandy 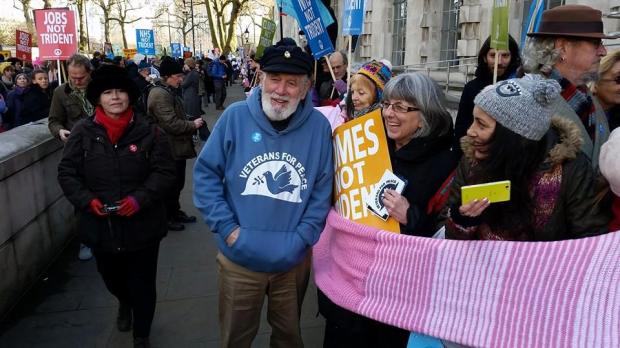 Jim at an anti-trident protest 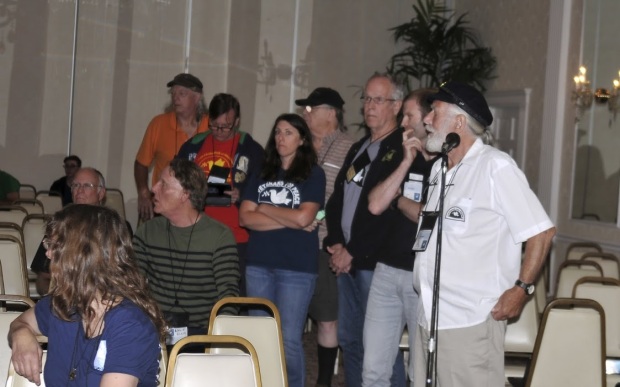 A gathering in memory of Jim Radford will be held when lockdown rules have eased enough to allow one.

Please feel free to leave your own memories of Jim in the comments below.