5 QUESTIONS FOR VETERANS FOR PEACE UK
Who are Veterans for Peace UK and why do you work to counter
military recruitment?
In our handbook (available to view on our website – http://www.vfpuk.org), we have in our statement
of purpose a simple statement;
“We veterans of the armed forces, having dutifully served our nation, do hereby affirm our
greater responsibility to serve the cause of world peace.
To this end:
(a). We will work toward increasing public awareness of the costs of war”
What kind of counter-recruitment activities do VFP UK do?
VFP UK have become increasingly concerned about the growing levels of militarisation in the
public arena. The best examples of this are the government using the rebranded ‘Armed Forces
Day’ (previously Veterans Day) as a pseudo-recruitment tool, alongside millions of pounds being
invested by government in promoting ‘military values’ in schools.
In seeking to counter this, VFP UK attend Armed Forces Day events to interact with the public,
offering an alternative perspective on war and its effects. We also look to do the same in schools
and colleges, as well as events and meetings of concerned individuals and organisations we are
invited to attend.
Of particular concern is the Army now being invited into primary schools, where military ‘drill’
and other military training activities are taught to young children. This is drip feeding the
nation’s children with a one sided view of life in the military and requires countering with the
balanced viewpoint offered by veterans who have served in all recent conflicts. VFP UK can,
wherever possible, provide a very different perspective to the often sanitised version being
promoted by the government.
What is VfP’s message for young people and their families about
joining the armed forces?
‘War is not the solution to the problems we face in the 21st century’.
We have this statement on our t-shirts and sweatshirts worn on all VFP UK outreach events.
The purpose and point of any military is to join with and kill or destroy its enemy. The majority
of military training is based on this ethos. If you choose to join the armed forces, no matter what
your chosen role, you will be trained to function in that role as part of the overall system
designed to achieve this aim, and you will be expected to function within this system without
any redress or argument.
VFP UK is not a pacifist organisation, and we do believe that countries have an inherent right of
self-defence. We, therefore, believe our country needs a military, albeit in a very different form
and size, and trained/equipped to defend and not launch wars overseas.

VFP UK always seek to convey our message with openness, friendliness and respect. We will not
assault, verbally or physically, in person or online, those who oppose or disagree with us, even if
they assault us.
What kind of impact do you see your activities having? How do
people respond to you?
VFP UK are a small organisation with a big aim. We believe, despite our limited resources and
membership, we have contributed greatly to raising the issue of peacemaking in our nation (and
elsewhere) through positive and nonviolent actions and words.
On the whole, as veterans, we generally receive a favourable response from the public. We do,
wherever necessary, challenge government and it is fair to say governments everywhere do not
like being questioned about their activities or actions particularly if they are aggressive or costly
in lives or economics.
Do you co-operate with others in your counter-recruitment work?
What do you think it adds having veterans involved?
VFP UK have and will work with and support organisations who share our vision for peace. We
are politically and financially independent, but seek to create strategic partnerships to attain
common goals and purposes. Because our membership is made up of veterans from all services
who have served in nearly every conflict including and since the second world war, we can bring
a perspective and a credibility to the conversation that is balanced and insightful.
We would ask that all veterans consider our message and look to join with us in ending
militarisation and the costly arms race.
Thanks to Ian Johnstone, the North-west co-ordinator of Veterans for Peace UK (VFP UK),
for responding to these questions. 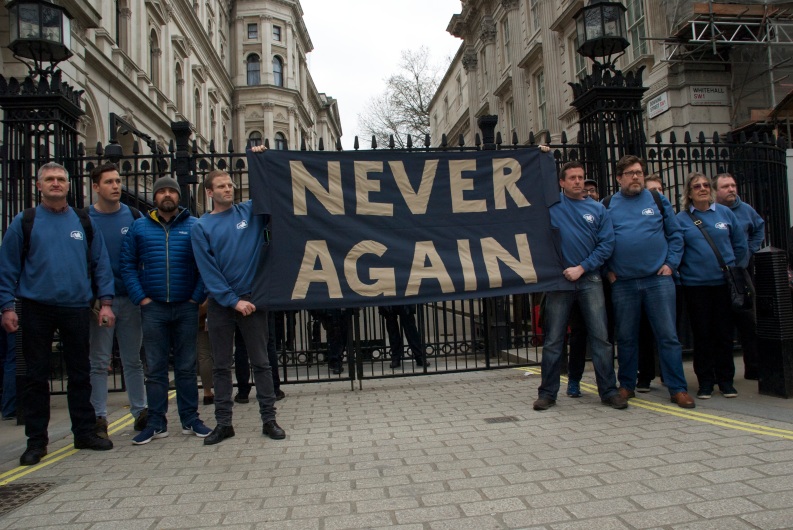